AN ELDERLY rescue dog who has found a forever retirement home has visited a vet who has secured a cash boost for the charity which has been looking after him. 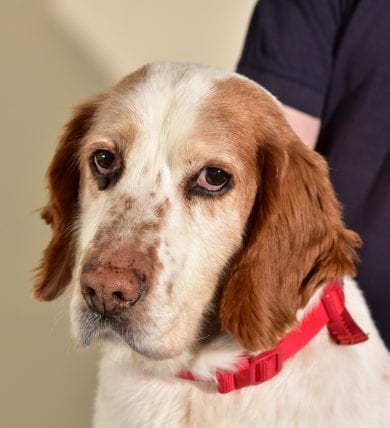 Horlicks, a 13-and-a-half-year-old lemon and white Sprocker, which is a cross between a cocker and springer spaniel, has been loved and looked after in a foster home provided by the Cocker and English Springer Spaniel Rescue (CAESSR) for the last few weeks.

He extended a paw of thanks to Senior Small Animal Vet Richard Nolan of Manor Court Veterinary Centre in Church Street for a £500 donation from Willows Veterinary Group which owns the surgery in the centre of Tarvin.

The independently-owned veterinary group, has a network of 25 small animal surgeries, a referral veterinary hospital, two equine centres and a seven-office farm practice located across Cheshire and into the Wirral, North Wales and Staffordshire.

Richard put forward the cause on behalf of his surgery at a Willows staff party where nominated animal charities were put into a hat and two were drawn out to receive a £500 boost each. The other £500 went to the Warrington-based Cat Homing and Rescue (CHAR).

Richard said: “CAESSR is an excellent charity which provides a lifeline for the dogs it rescues and finds new, suitable homes for.

“Without the charity team’s care and kindness, a lot of these dogs would face an uncertain future and I am delighted to be able to secure this money for them to put towards their excellent work.

“I have known two of the charity’s founders, Di and Ian Harrison, for most of the 30 years I have been at the practice, and their dedicated, tireless work to look after the dogs in their care deserves our support wholeheartedly.”

Horlicks has been putting his feet up in the comfort of CAESSR foster carers Jane Robinson and Tony Pimblott’s home and news has just come through that he will be going to a new permanent home found for him by the charity.

The couple, who have four children and nine grandchildren between them, have three other spaniels, all rescued via CAESSR and provide a regular foster home for other needy dogs which the charity takes in.

Jane said: “Horlicks is a lovely, gentle dog and he has mixed in beautifully with our three other dogs.

“He’s well behaved, he doesn’t act his age because he is quite sprightly, good on the lead and I really can’t speak highly enough of him. We have fallen in love with him but we are so pleased that he has now found a permanent home to enjoy his twilight years.”

Di and Ian Harrison of Duddon, near Tarporley, founded CAESSR in 2010 along with John and Pat Powell from Stoke-on-Trent in Staffordshire where the charity has its main kennels. Sadly, Pat lost her battle with cancer two years ago and volunteer Lisa Guthrie now looks after the charity finances. CAESSR now has a network of volunteers all over the UK.

John said charity donations, such as the one from Willows Veterinary Group, were essential for allowing CAESSR to continue with its good work.

He said: “It’s very kind of Richard and Willows Veterinary Group to support us in this way. It gives us a real boost to receive news like this because there are so many dogs we want to help and it is money like this which helps us to reach out to more.

“Running CAESSR every year costs in the region of £55,000 so any financial support we can get is so valuable.

“This money goes towards medical treatment, kennelling costs, insurance, transportation and the general care of the dogs.

“With Horlicks, because of his age, we have pledged to cover any ongoing medical care he might need from his new owner, excluding flea, worming and vaccination costs which all dog owners would need to keep up with.

“The money for supporting rescue dogs like Horlicks and finding him the right home has to come from somewhere and the £500 from Willows Veterinary Group is a tremendous boost.”